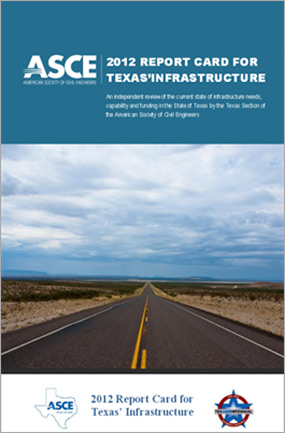 Infrastructure is a part of our daily lives. Too often we take it for granted, even though in a typical day, most of us use or are impacted by each of the infrastructure categories assessed in this 2012 Report Card for Texas’ Infrastructure by the Texas Section of the American Society of Civil Engineers.

How Do You Use Infrastructure?

Before you even leave the house, you will turn on a light, which works because of energy infrastructure; get dressed in the morning using drinking water and wastewater infrastructure; eat a piece of toast, made with wheat grown using water dam infrastructure and transported on roads and across bridges, or along navigable waterways. After breakfast you might watch your kids leave for school and then take transit to work. You’ll take the garbage to the curb, which is disposed of using solid waste infrastructure, and if there’s a heavy afternoon storm, flood control infrastructure will protect your house. In the evening you’ll open a letter, mailed to your house using aviation infrastructure. We expect infrastructure to work efficiently and when it doesn’t, we quickly find out how much we rely on it like our fellow New Yorkers in the wake of the devastating super storm Sandy.

How is Texas' Infrastructure Doing?

Aviation
C+
Texas has 26 large commercial service airports with scheduled passenger traffic, emplaning 67.7 million passengers in 2010. Since 2004, primary commercial aviation facilities have kept up with demand. For the same period, general aviation, which includes 266 airports, has not kept up with demand due to the lack of funding. All Texas airports reported that current funding for maintenance is not adequate, due to the age of the infrastructure and a large need to address failing facilities.

Bridges
B-
In the past four years, TxDOT has made significant progress in eliminating structurally deficient bridges. Texas has 51,557 total bridges, which is 59% more than any other state. Of these, 10,137 bridges are still considered nonsufficient or load restricted. The number of both structurally deficient and obsolete bridges is expected to rise over the next 10 years. Funding is needed to achieve TxDOT’s goal to improve and maintain existing and new bridge structures.

Dams
D-
Texas currently lists 7,126 non-federal dams including 1,046 high hazard (probable loss of life) and 725 significant hazard dams (potential loss of life). An average of four dams fail in Texas each year. The Dam Safety Program has received additional funding from the state for dam inspection and review of emergency action plans since most high hazard dams do not have regular inspections or maintenance. The recent legislative session in Texas exempted many small privately owned dams from a number of the program requirements. There is still no state funding to cover the cost of dam repairs, and federal funding is very limited.

Drinking Water
D-
Water supplies are a critical issue for Texas. Most of the available water is located on the eastern side of the state; however, the water demand is primarily located in the central and western portions of the state. If a major drought occurs in Texas in 2060, approximately 41% of municipal demand for water could not be satisfied by current water sources. TWDB estimates about $212 billion will be needed in 2060 for water supplies, treatment and distribution, wastewater collection and treatment and some flood control projects.

Energy
B+
The majority of Texas – 85% of electricity usage and 75% of the geographic area – is served by the Electric Reliability Council of Texas (ERCOT). From 2004 to 2012, the surplus reserve margin decreased from 30% to 12%. In 2004, twothirds of the generation was supplied from natural gas. In 2011, approximately 40% of the electricity in Texas was generated using natural gas as the primary boiler fuel, 39% from coal, 12% from nuclear, and the rest from wind and other renewables. ERCOT has a total of 72,500 megawatts of generation capacity, with a load of 66,000 megawatts. The ERCOT service area has 40,500 miles of transmission lines.

Flood Control
D
Since 2004, the National Flood Insurance Program State Coordinator office has been relocated under TWDB; additional staff and funding for mapping and planning projects has also been provided for the office. Texas still has no statewide floodplain management plan and is not a participant in the National Flood Insurance Program, although many of its communities are. Texas leads the U.S. in terms of dollars paid for flood claims. Other than lowinterest loans and small grants, Texas does not fund flood control infrastructure.

Inland Waterways
C
The Gulf Intracoastal Waterway (GIWW) is a federally maintained channel that links Gulf Coast ports and the inland waterway system. In combination with ports, Texas ranked 1st in the nation in total waterborne tonnage moved in the U.S. The GIWW has received additional funding in the last eight years for its maintenance and repair. The level of maintenance and repair of the aging infrastructure is directly tied to the amount of federal funding received.

Roads
D
While the Texas Transportation Commission has encouraged innovation in alternative project deliveries and funding, overall maintenance has declined and funding for traditional projects has declined. Texas now ranks 43rd in highway spending per capita in the U.S., falling significantly from number 17 in 2008.

Solid Waste
B+
The per capita solid waste disposal rate in Texas has decreased from 6.5 pounds per capita per day in 1993 to 6.2 pounds per capita per day in 2010. Due to increases in permitted capacity and in technology, landfill capacity has increased. Recycling and use of methane gas for green power have increased. Private landfill operators have an economic incentive to improve their facilities. Solid waste infrastructure and management services are funded by private companies and local governments

Transit
C+
The 2011 TTI Urban Mobility Study ranked Dallas/Fort Worth 5th and Houston 6th nationally in traffic congestion; however, much of the rural and smaller cities across the state are not experiencing congestion. In the past eight years, a number of cities in Texas have made progress in adding transit services, including buses, vanpools, passenger rail, etc. Texas remains heavily dependent upon federal and regional mobility funding to continue developing Light Rail Transit.

Wastewater
C-
Large investments by most urban centers have improved wastewater infrastructure. However, due to population growth and aging wastewater infrastructure, Texas needs to invest $11.2 billion over the next 20 years to upgrade facilities. Federal standards have become more stringent, but funding has not kept up pace with these standards. Wastewater reuse has been increasing due to the restricted availability of new water supplies.

$135.90 million in bridge funds came from the Federal Highway Bridge Fund in 2011

78% of the state regulated dams have an Emergency Action Plan

$33.9 billion in drinking water infrastructure needs over the next 20 years

28.967 gigawatt-hours of renewable energy every year, ranking it 5th

$115.0 million of unmet needs for its parks system

$5.7 billion a year in costs to motorists from driving on roads in need of repair, which is $373 /yr per motorist

$11.5 billion in wastewater infrastructure needs over the next 20 years